A forum where Old Cliftonians and parents, past and present, can meet to be informed,
get connected and be involved. Click on one of the links below for further information.

It is a great pleasure to announce that in 2016 we saw the launch of The Cliftonian Society. The very simple aim is to bring under one roof the operations of the OC Society, the CCEF and the CCDT, and the approach will be evolutionary rather than revolutionary!

We intend to keep things rolling along in a familiar way, introducing new ideas and approaches as appropriate. We are looking forward to the challenge with a suitable mixture of excitement, hope and anxiety!

This Online Community Enables You to

Search for and contact any member registered within our alumni program.

Inform others of  your activities via a biography facility.

View, post or seek assistance on any particular issue on the bulletin board.

View our calendar of events.

Encourage others to join.

OC Golf Society, The Berkshire 16th September 2020
20 OCs and three pupils gathered for a wonderful day out at The Berkshire. The courses were in top class condition, and the hospitality excellent, alt...
OCs looking out for each other
We would like to share a wonderful story of two OCs.

We have heard from Steven Benson (ST/WaH 1973) who runs a care home in Notthinghamshire.
...
Clifton Quarantine House
Many of our boarders needed to isolate on arrival in the UK this year. Clifton set up School House as a quarantine house and some of our OCs helped to...
James Partridge - SH 1970
It is with great sadness that we report that James died in August 2020. We anticipate paying tribute to his life and work in our 2021 Magazine.
Jam...

Below are listed the most recent OC Events. For details of upcoming events, please follow this link: Events Alternatively, you can see older events on the relevant Branch Page.

For one hundred and forty years Clifton College has supported a vibrant Jewish community within the school. It is the only public school with its own synagogue, enabling Jewish students to maintain their identity while also being Cliftonians.

The Polack’s House Educational Trust is an independent charitable organisation that provides means tested scholarships and bursaries for Jewish children at the College, supporting children from year seven onwards.  Recent recipients have gone on to fantastic universities including, Oxford, Exeter, Edinburgh and Bath.

The wonderful event included speeches from beneficiaries of the Trust, Head of College Dr Greene, Guest of Honour Sir Trevor Chinn, retiring Chairman Nick Tarsh, incoming Chairman Alan Karter and MC Julian Saipe who, together with the Cliftonian Society, did a marvellous job organising the event.

With cricket on the Close as the backdrop, glorious sunshine, a wonderfully warm atmosphere and an excellent lunch, the event was a memorable occasion on which to celebrate Jewish Life within the College, the life of the Trust and the huge contributions made by Nick Tarsh [in particular] and John Mocatta.

We look forward to the 50th Anniversary!

A great group of OC met up in Toronto

The Bristol Branch dinner moved to a new slot this year, and out of Big School and up to The Clifton Club. This latest innovation, initiated by the trio of Seb Hoyle [DH 91], Georgie Wooler [OH 89] and Martin Parish [ET 87], was extremely well received and ensured that 60+ OC's enjoyed a thoroughly entertaining evening in very accommodating surroundings. Lucy Nash ensured that proceedings went smoothly, and the food, drink and company were all of the highest order. The highlights were a sparkling speech from Tim Greene and a fascinating presentation from Tom Caulfield [ET 07] about rowing the Atlantic!

The Chapel, and the singing of carols, proved to be an irresistible temptation for many OCs and their families. Large numbers swelled the congregations at the back to back school services on the last Sunday of the Michaelmas Term. There was also plenty of time for socializing in the Crypt, some decent mulled wine and copious mince pies.

Drinks before the School Play - 9 November 2017

A small group of OCs, some of whom had travelled a fair distance, met for drinks prior to the Thursday night performance of the College's main production of the year, School Of Rock. This was Karen Pickles' swansong as Director of Drama, and proved to be a typically energetic and entertaining show, much enjoyed by all ... and the drinks were a super way to prepare for the experience! 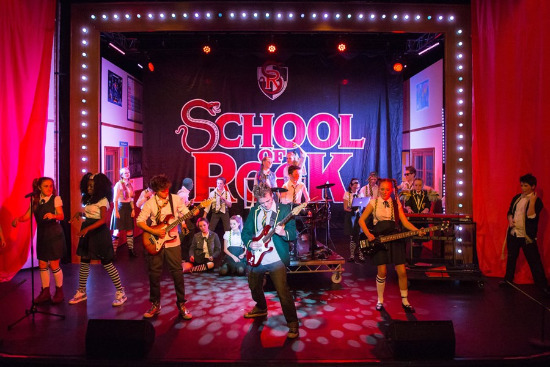 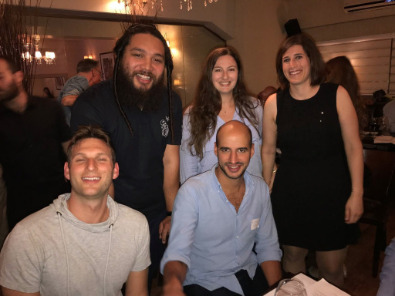 Your Secretary's conviction that Tel Aviv could become the epicentre of the OC world for at least one night, and the splendid efforts of Stephen Kurer, in particular, and Simon Jaffa [both PH, 82 & 88], ensured a wonderful event in the party capital of the Levant, with more than 50 in attendance. A hard core of Israelis was supplemented by visitors from the UK, the USA, Ukraine, Botswana and India, and a famous time was had by all, capturing a huge age range as well.The Polack's bell was rung very frequently, though how it got through El Al security is a mystery! Clifton was represented by the Head Master, the OC Secretary and Dai Barrett [Hon OC], who all enjoyed a fantastic trip - we must do it again, and soon!

The Cardiff & County Club played host to the annual gathering of the South Wales Branch, ably orchestrated by Nick Jones (BH 1989). The evening was, as usual, a roaring success, with more than 40 sitting down for dinner in the most reassuring of venues. The broad age range (from undergraduate to 80+) was similarly reassuring, suggesting that this particular branch is excellent at keeping OCs in touch with each other and The Society in a most inclusive way. David Jones (BH 1955) presided with his customary style. 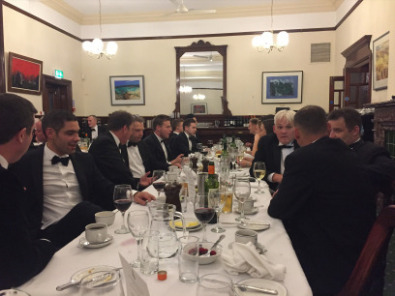 The Willcocks Memorial Appeal reached a celebratory climax with an inaugural concert in October, followed by a splendid dinner in the Newbolt Room. The refurbishment was completed by organ-builder Harrison & Harrison over the summer; the new 32ft Double Ophicleide Pipes duly deliver “a thrillingly profound extra octave of bass sounds”, from the instrument on which Willcocks himself learnt.

A group of more than 20 OCs, spanning at least 50 years, gathered for drinks and an informal lunch prior to the Governors’ Cup match against Marlborough. It was a very successful initiative, and included the first outing for the Society’s excellent new gazebo, resplendent in OC colours. We took up residence in the Languages Café and garden of 4/5 Worcester Road, talked a good game of rugby over lunch, and then had the pleasure of watching the XV beat the old rivals with the last kick of the game – a perfect conclusion to proceedings, and an event that will certainly become a fixture in the calendar.

The opening of Holland’s House was well worth celebrating in September, especially as it owed its establishment to the generosity of the OC community. It coincided with “30 Years of Girls at Clifton”, and lunch in the Newbolt Room was a convivial affair for a number of old girls to enjoy a trip down memory lane and discover that coeducation was now very much in the DNA of the College – a very welcome development for the 21st Century.

Reunion for School House OCs who arrived together in Summer 1953

A group of OCs recently met for lunch - all entered the school in Summer 1953 spending their first term in The Old San & moving to School House for the Winter term. The house was full to capacity for the Summer term. Peter Simmons is holding a picture of the House in Summer 1956.

The school was delighted to welcome back two of their illustrious Old Cliftonians to launch their new CD entitled Subito released on the St John’s Cambridge label.

Julia Hwang (HH 2014) gave her professional solo debut at the age of nine with the English National Baroque Chamber Orchestra. She has performed across the globe and appeared many times on TV and radio

The recital included The Lark Ascending by Ralph Vaughan Williams,a piece she performed for a BBC4 in a documentary about the nation’s favorite composition.

In 2015 she was appointed a cultural ambassador for the BRACE Alzheimer’s Society alongside broadcasters Jonathan Dimbleby and Martyn Lewis.

Julia is an undergraduate and academic scholar at St John’s College, Cambridge. She began her violin studies at the age of seven in Clifton’s Preparatory school. In October of this year she will take up her scholarship at the Royal College of Music.

She plays on a Peter Guarnerius of Mantua violin (c1698) on generous loan from the Alderson Trust.

Charles Matthews (ET 83) was at Clifton for ten years before studying at the Royal College of Music, London and was an Organ Scholar at Trinity College, Cambridge.

The recital was truly breathtaking and the audience were treated to a varied programme including works from Beethoven, Lutoslawski and Faure and finishing with Concert Fantasia on themes from Gershwin’s Porgy and Bess.

Copies of the CD can be obtained online from Presto Classical - click for link.

BARMY BRITAIN FUNDRAISER - The Redgrave Theatre was delighted to welcome the Birmingham Stage Company to Clifton when they performed two shows on the 10th June of their smash hit The Best of Barmy Britain fresh from its record breaking run in the West End.

Actor/Manager Neal Foster OC (PH 84 ) generously donated the proceeds from the matinee and evening performances to the school’s Trevor Howard Scholarship for the Performing Arts and conducted a Q and A after the second show; much to the delight of the school’s drama pupils and other adults and children in the audience.

Neal is also the Director and Co-Writer of the show.

The total proceeds amounted to £8375 and we are indebted to Neal and his team for their marvellous show and support of the school. 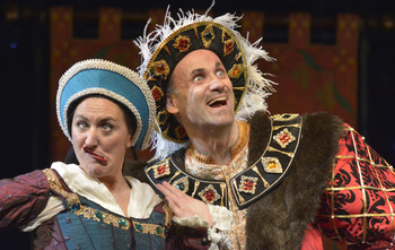 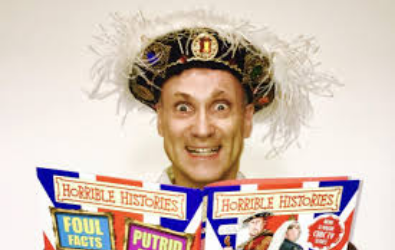 Thanks to our OC team who came out for Commem to play the School 1st XI, a narrow defeat for the OCs but hopefully we've inspired some of our 2017 leavers to join the OC Cricket Club!

On May 6th, the College hosted a marvellous reunion for those who left the school in the 1990's. The proceedings got underway with a Chapel service at 11.30, at which Jez Walters [SH 1997] preached with clarity, humour and insight, lightly dusted with nostalgia: he earned a round of applause from the school, a rare honour!

Drinks and an excellent lunch followed, and the afternoon provided an opportunity to see those parts of the school that have changed so much in the last 20 years, notably the Music School, the Science School and 4/5 Worcester Road. The re-located Watson's also drew gasps from the traditionalists among the 100 or so returning OCs, and there was a remarkable trip down memory lane as Lucy Nash hosted a tour of the Pre, where some of the attendees had started as boarders in the mid 1980's!

The XI playing King's Taunton provided a suitable backdrop to tea taken largely on the parapet, and the evening's festivities kicked off at 7.00 pm. The highlights were undoubtedly a sparkling address from the Head Master, and an hilarious after dinner speech from Pat Chatterton [SH 1996]. But the abiding memory of the evening will be of the fun, the camaraderie and the simple enjoyment afforded by the opportunity to catch up with old friends. One OC summed it up beautifully in this note of thanks:

"I think the day went beyond any of our expectations. It was amazing to catch up with everyone and it really was like we'd never been away."